Rep. Matt Gaetz, a Republican from Florida, attacked Secretary of Defense Lloyd Austin, saying he was “perhaps the stupidest person” to ever serve in a presidential cabinet.

Gaetz made the remarks during a speech in Iowa this week, criticizing Austin for his decisions regarding Afghanistan and Syria.

Austin, a retired four-star general in the U.S. Army, was appointed by President Joe Biden in January. He is the first black Secretary of Defense in US history.

VIDEO – Rep. Gaetz: “Lloyd Austin could be the stupidest person to ever serve in a presidential cabinet in American history” https://t.co/xCZ8P58XAk

“Secretary of Defense Lloyd Austin is perhaps the stupidest person who has ever served in a presidential cabinet in American history,” Gaetz told the crowd in Iowa Thursday.

“He failed more than anyone I can imagine,” said the GOP legislature.

Secretary of Defense Lloyd Austin speaks to the press at the Pentagon in Washington, DC on August 18
OLIVIER DOULIERY / AFP via Getty Images

Gaetz attacked Austin because of his record in Syria and Afghanistan. From March 2013 to 2016, while still serving in the U.S. Army, Austin was the commander of CENTCOM, which oversaw military operations in the Middle East, Central Asia and parts of South Asia, under the administration of former President Barack Obama.

Gaetz also criticized Austin for advocating racism and white supremacy in the military.

“The problem facing the US military is the threat of radical Islamic terrorism, not the threat of patriotism wearing uniforms,” ​​said the Republican congressman. “They are not the ones we need to target and investigate. They are the ones we should love and honor.”

Gaetz – a staunch supporter of former President Donald Trump – is reportedly being investigated by the Justice Department to see if he had a sexual relationship with a 17-year-old and paid for the minor’s trip.

The Congressman spoke with Trump Loyalist Rep. Marjorie Taylor Greene, a Georgia Republican, at the Iowa event. The two GOP lawmakers have been attending events across the country together in the past few weeks touting Trump’s record while attacking Biden and the Democrats. 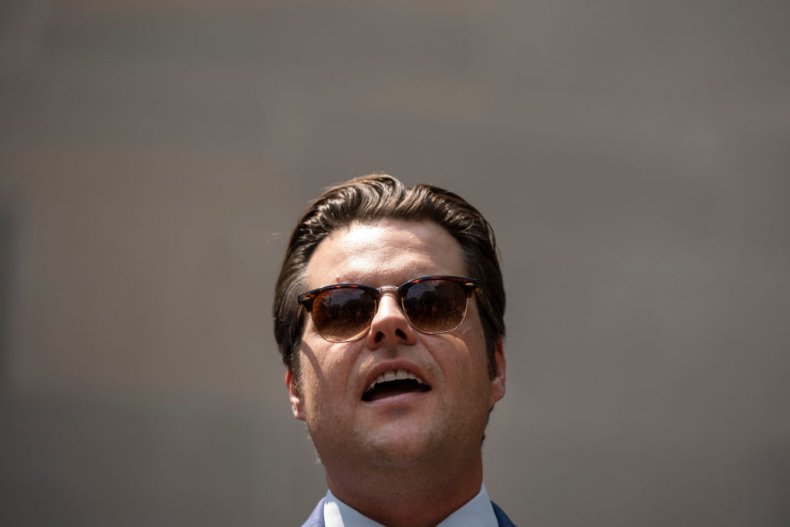 Rep Matt Gaetz (R-Florida) said Secretary of Defense Lloyd Austin may be the “stupidest person” to serve in a presidential cabinet at an event in Iowa this week. In this photo, Gaetz speaks during a press conference outside the US Department of Justice on July 27th in Washington, DC
Drew Angerer / Getty Images

In her speech in Iowa, Greene described the Democrats, the media and “big tech” as the “new axis of evil”. It also beat the “old guard” Republicans and called on Senate minority leader Mitch McConnell and the Bush and Cheney families.

Newsweek approached the Department of Defense for comment but did not receive an immediate response.